AN AMAZING YEAR – FROM CONCEPT TO TV! 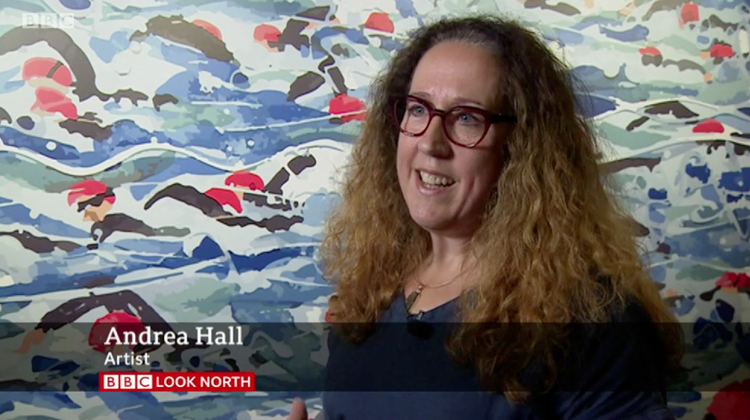 Well, when it all starts happening, it happens really quickly.

When I was invited last year to exhibit at the Stephen Joseph Theatre in Scarborough this Autumn, I didn’t fully appreciate what a great opportunity it would be, but I said yes immediately.

I had a year to prepare for it, but I was just at the beginning of my art journey, so I didn’t really realise the significance of it all. I knew the theatre was famous – lets face it, even I had heard of it, so it must be.

At that time I had just started painting the view from the water inspired by one of my favourite swim locations. A few people I knew through the sport had shown an interest and bought a few, but that was about it. I was still finding my feet and deciding which way I wanted to go. I knew the future was going to be exciting though, I could feel it. 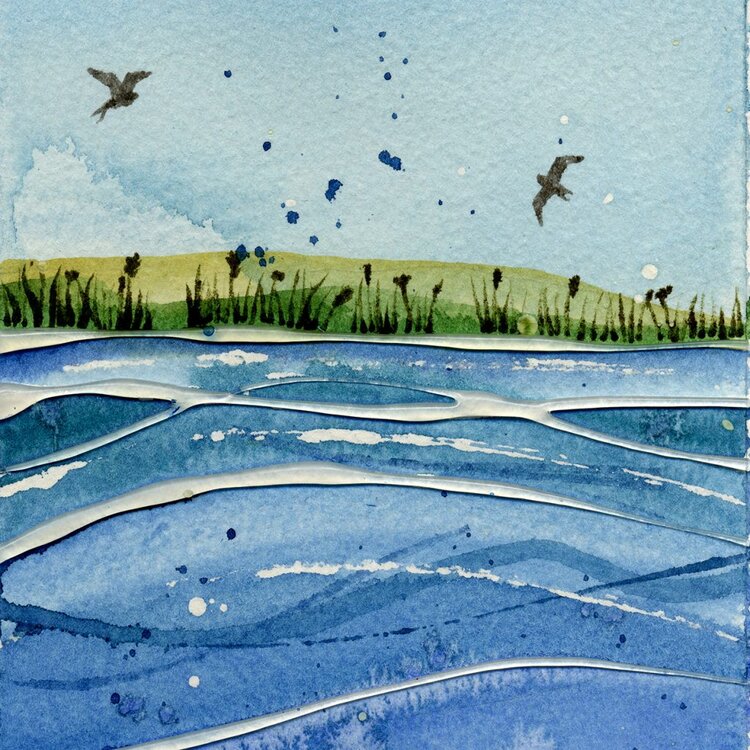 By New Year 2019, I had re-designed my website, opened an Instagram account and set up an Etsy shop and I was telling all my friends that this was going to be my year. But I couldn’t imagine in my wildest dreams what was about to happen.

I decided to exhibit at the Great North Swim. It took me two months to get ready for it (and a lot of money). I’d had the great idea of producing my mass start designs in all the different colour waves and personalising them by putting people’s race numbers on one of the hats. So I had to create the artwork and invest time and finances in getting the mounted prints done in advance, as well as preparing the exhibition stand itself, the gazebo, lighting, payment system and all the other paraphernalia. 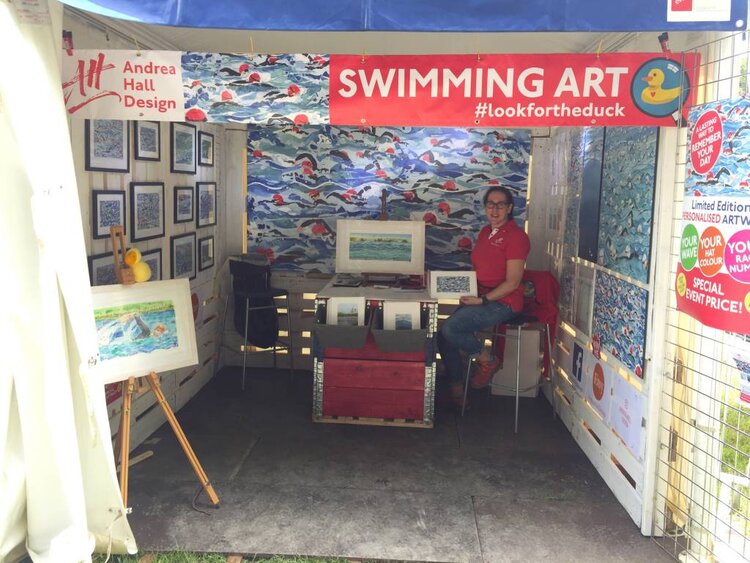 My stand at the Great North Swim 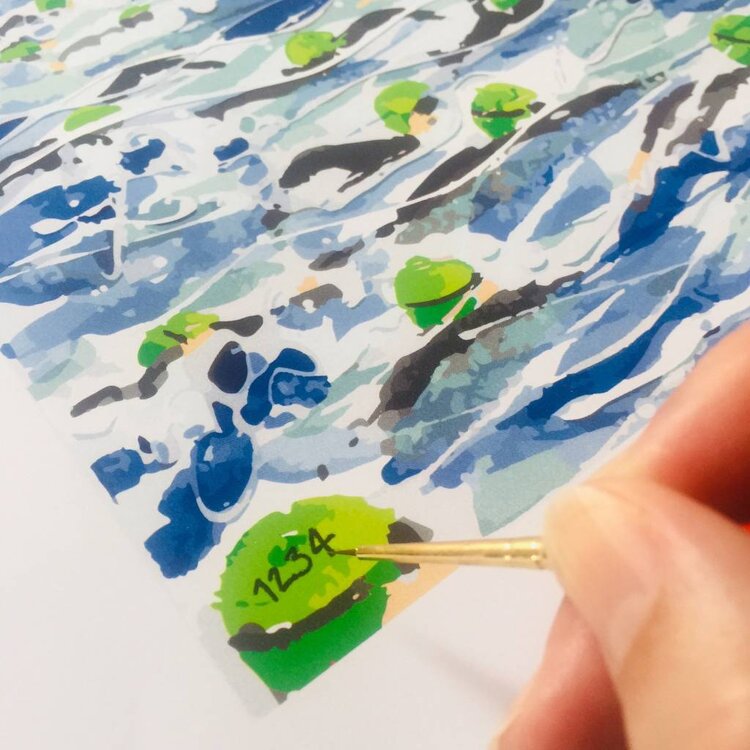 It was a major project, but it went down really, really well. On the event day I had queues, and at times found it hard to keep up. This told me I was on to something.

For the rest of the Summer I focused once again on getting everything together for the exhibition opening at the beginning of September.

The theatre has a press officer who had sent out details of the upcoming exhibition to all the local and regional media, and the uptake was amazing. All the papers picked it up and ran images of my work and the story of the duck. It felt great. Then came the scary bit – 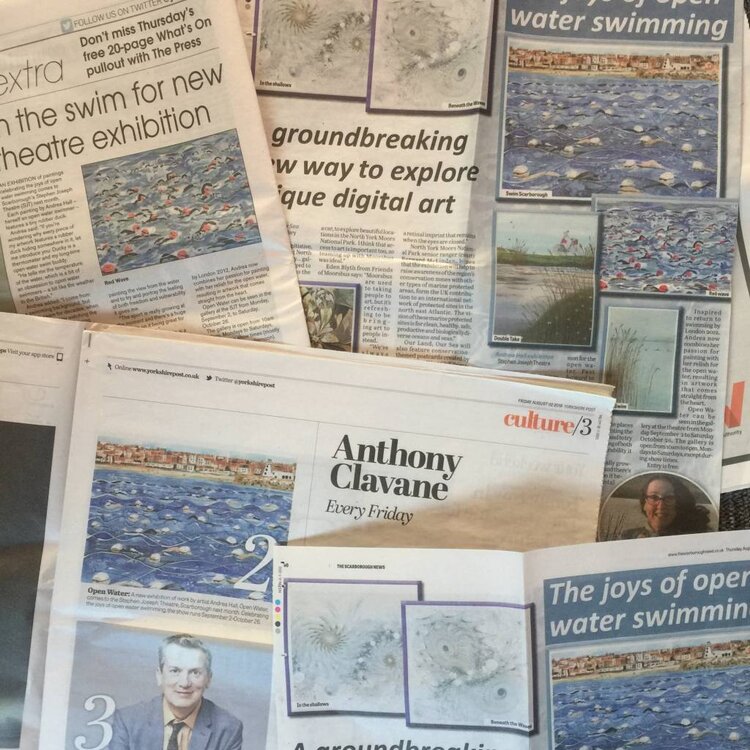 I was busy working one morning when I became aware of a message marked urgent, through Twitter. I was to contact my local BBC radio station who wanted to talk to me. The next thing I knew I was live on the radio telling my story about my swimming journey and how this inspired my artwork. I have to say I thought triathlons and mass starts were scary, until now. Talk about getting out of your comfort zone and pushing yourself!!

I was told by the presenter and BBC staff, friends and customers who had heard it, that I was a natural, and came across really well. Nobody could see my red face, the sweat, or the shaking though so I was ok with it.

On the back of this came my biggest challenge – or opportunity – to date. I got a call from the press officer to ask if I was up for BBC Look North!! I immediately said yes. When I spoke to the researcher and she said they wanted to film me at the theatre gallery and also swimming, it suddenly felt like a scary rip tide carrying me to an unknown destination, but I knew it was something I had to go along with, so I re-arranged my diary for filming day, and off I went with my swim bag in the boot.

Filming was fun. My work was featured in detail, I was interviewed, did a piece to camera, and then went for a swim with the reporter, who was also game for getting her kit off on camera (I swim skins whenever possible). I was a little worried how it was going to turn out though because there were only a couple of times where we had to take the shot more than once, but it was wonderful – they are so professional. 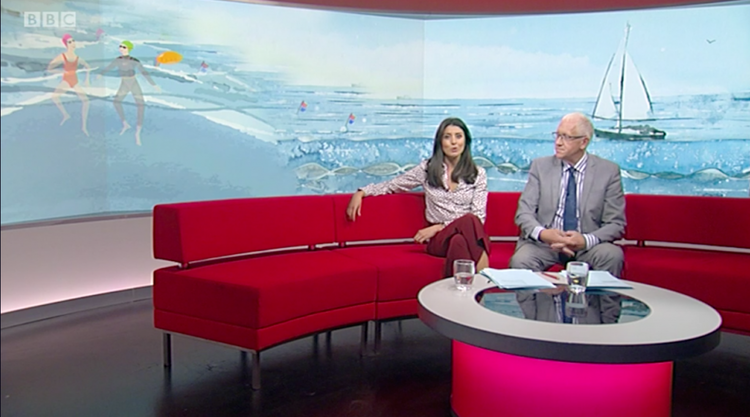 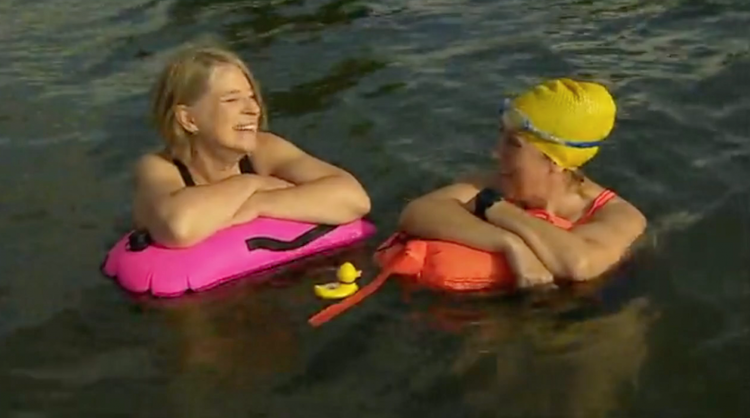 With presenter, Cathy Killick and Ducky

The exhibition at Scarborough is now concluded and it was a storming success – I sold a huge amount and am officially one of their best selling artists, which isn’t bad for my first attempt. However, I have to be honest and say, for me it’s not about the money, but the recognition for my artwork and spreading the word that this swimming malarkey makes positive things happen!

And this is just the beginning… watch this space!

• Andrea has designed her own open water swimming Christmas cards which are fantastic and humorous will make you feel all Christmassy.
Click here to take a look https://www.etsy.com/shop/andreahalldesign/